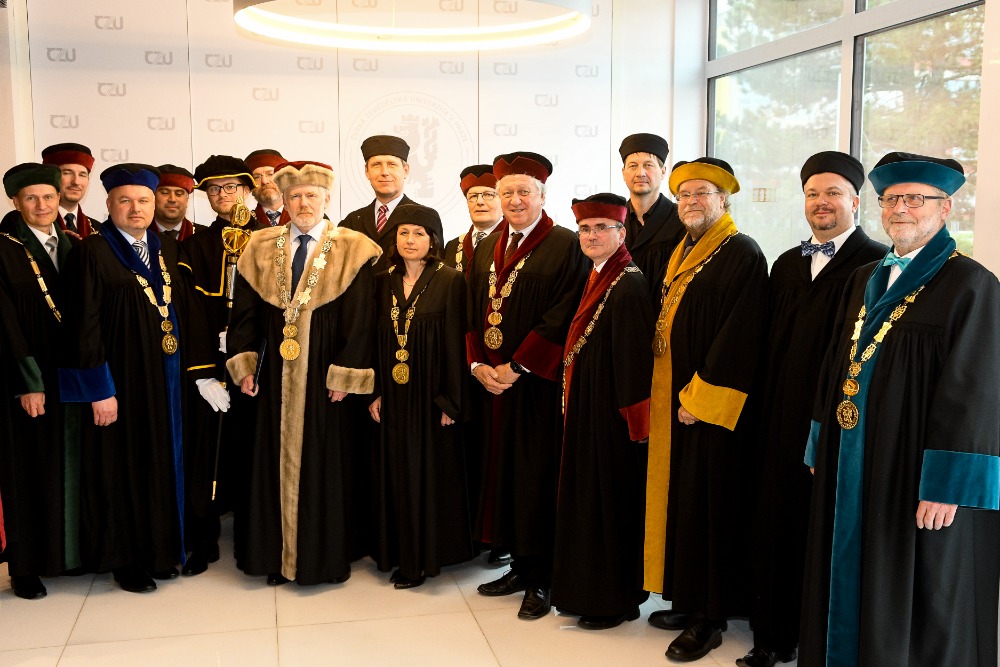 The ceremonial assembly of the Scientific Board of the Czech University of Life Sciences Prague on Monday, 25th April 25, 2022, provided an opportunity to begin the celebrations of the 70th anniversary of the university's independent existence. In front of the vice-rectors, deans of individual faculties, and other high-level academic officials forming the honorary college, new associate professors and doctors received their diplomas in the auditorium. Three newly appointed deans were inaugurated, and academic emeritus officials and important CZU partners received the Rector's Award.

"Out of joints, times are crazy," remarked CZU Rector Petr Sklenička at the beginning of his speech and immediately placed Hamlet's statement in a more optimistic context: "Despite this, academic life at our university and the whole country is alive. Universities were able to adapt and work in new, much tougher conditions. In addition, they have become a vital strategic infrastructure for our country. They have proven themselves during the pandemic and with current assistance to Ukrainian refugees."

The Czech University of Life Sciences Prague has not only managed to deal with the pandemic crisis with honor, but above all, its assistance to war refugees has been and is unprecedented. However, there are many more reasons for this year's jubilee celebrations. The university has established itself among the best universities in the Czech Republic and is also doing well in foreign evaluations. "In 70 years, we have built a unique modern campus, where it is a pleasure to study and work. Hundreds of thousands of students have passed through our university in 70 years. I am certain we have something to be proud of. We are happy with our success, but we know very well about the potential to further improve our university's quality. We have taken this route, even if it is not the most comfortable. We are glad that we are not alone and that many partner organizations work with us and support us. We appreciate the eight most important here today. And I want to thank them for their support, generosity, and cooperation," emphasized Professor Petr Sklenička.

For its round anniversary, the university decided to reward the most important partners with the Rector's Award in the form of a bronze sculpture of the goddess Ops. They travel into the hands of eight organizations and institutions. These include the Academy of Sciences of the Czech Republic, Mendel University in Brno, and the University of South Bohemia in České Budějovice, as well as two banking institutions: Česká spořitelna, a.s, and MONETA Money Bank, a.s. The leading partners of CZU in the field of technology are the joint-stock companies STROM ŠKODA and ŠKODA Auto, which also did not go unnoticed in expressions of thanks in the form of the goddess Ops. The prestigious CZU partner, the T-Mobile Czech Republic, a joint-stock company, definitely cannot miss among the prestigious eight. The university owes the company, among other things, for the coverage of 5G networks throughout the campus.

An essential part of the program was the graduation of eleven new associate professors and thirty-nine doctors. This was also the last item on the agenda of the ceremonial assembly of the CZU Scientific Board, which was closed by the student anthem Gaudeamus Igitur.

We use cookies on the web presentations of the Czech University of Life Sciences Prague (under the czu.cz domain). These files give us ways to serve our services better and help us analyze site performance. We can share information about how you use our sites with our social media, advertising, and analytics partners. In the settings, you can choose which cookies we can use. You can change or revoke your consent at any time.

Cookie settings customization
We use cookies on the web presentations of the Czech University of Life Sciences Prague (under the czu.cz domain). These files give us ways to serve our services better and help us analyze site performance. We can share information about how you use our sites with our social media, advertising, and analytics partners. In the settings, you can choose which cookies we can use. You can change or revoke your consent at any time.
Essential cookies
These cookies are essential for the proper functioning of the website. They ensure the correct display, submission of forms, and without these cookies, we cannot provide you with services on our website.
Analytical and statistical cookies
We use this type of cookies to evaluate the traffic and performance of web presentations, e.g., how many people visit the presentation, in what frequency, what information you are looking for, which you do not find and which information is most important. Based on this data, we can improve the content and thus improve the services and information we offer.
Advertising cookies
Our partners use advertising cookies to display relevant advertising based on your preferences.